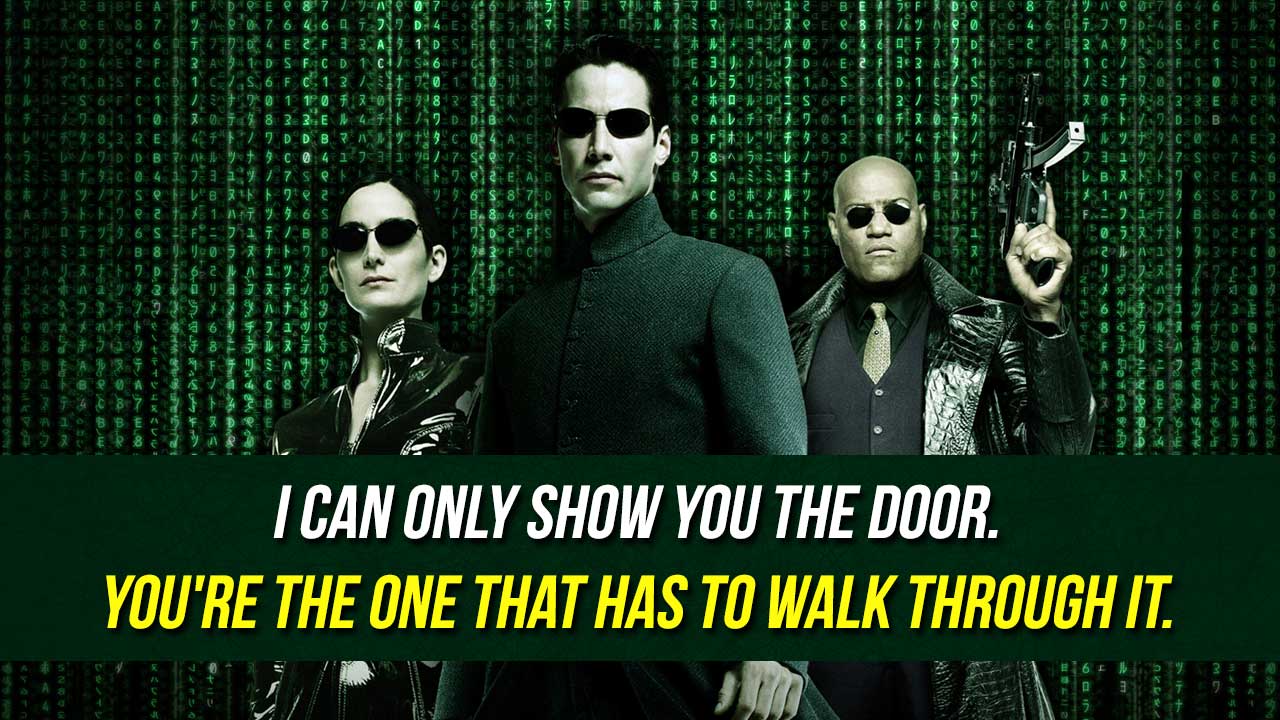 I’m in my mid(ish)-30’s. Trying to remember the plot of “The Matrix” was harder than my figuring out how to do a cat eye with an eyeliner back then (HOT TIP – it doesn’t work with a pencil eyeliner so don’t even try). What I CAN remember from my first go at watching this movie is, it was:

There wasn’t much more I could remember because I was in… junior high school when it came out? Maybe. At my age, memories of what grade you’re in when you see a certain movie gets blurry. The heavy artillery, cool goth clothes, and bitchin’ soundtrack were things I forgot, but I something I remember wanting desperately to emulate. I wasn’t quite cool or wealthy enough to acquire any of these awesome things, and I welcome these memories of being an inadequate teen. Thanks, Wachowskis.

While trying to forget about the second and third movies and just focusing on the first, I can say it’s much less confusing than what I remember it being. Speaking in riddles to a junior high student (e.g. “The Matrix is everywhere”, “If real is what you can see, then ‘real’ is simply electrical signals interpreted by your brain”) is way to heavy for adolescents to understand. Especially for a girl who just recently got her period. Dude, I have my social studies test on all fifty states in the US on Monday and a soccer game next week – I can’t keep track of this Matrix shit on top of that!

What else do I remember? Well, the effects were fucking cool as shit. I’m almost certain that I was in the theatre, flapping my hands up and down, looking like a demented bird when Neo leaned back and dodged those bullets. This was BRAND NEW EFFECTS AND TECHNOLOGY for the time, people! It spurs its viewers to look like demented birds!

I also remember its overall message and reasoning of the Matrix was fucked up. Aside from the wires and goo that each person emerged from, it was simply confusing. Are you in the real world? Are you in the Matrix? How do you know? Is the taste of wine and steak simply a projection of what you want it to taste like? How can you learn kung fu by connecting your brain to a computer program? WHY WOULD YOU SHOW ME THESE THINGS AND EXPECT MY 13-YEAR-OLD ASS NOT TO FREAK OUT???

Oh yeah. It fucked with my head.

It would seem, with time, heartbreak, learning the ways of the world, and adding drugs and alcohol to the mix, I got introspective. I learned to questions the way that things always where, why they were like that, why they weren’t like this. Kind of how Neo was questioning everything he knew to be true in his life. (Wait… is “The Matrix” an analogy for growing up? Have I cracked it????    ???????)

My questions got bigger and more overarching; why does the government do that? That’s dumb.

Why don’t they appreciate health care workers more? That would make everyone so much happier and healthier.

Why don’t they make student loans less of a burden?

Why do people who earn a lot of money not pay a lot of taxes?

I have learned the flaws of the system that we have to live, work, and die in. *Before you think I’m going to go all crackpot theory on you, no, I don’t actually think we live IN the/a matrix/matrices, I just believe we need to think more critically about what we’re being told by news outlets and forces that make the decisions for us* Maybe that did unwittingly start with watching “The Matrix”, who knows.

I’m glad I re-watched it. I feel I have been unfuckened. It makes much more sense as an adult and I have a bigger appreciation for the phenomenal amount of work that went into it. Of course, I realize now that it was a fictional construct that was made into an extremely successful franchise.

Upon watching it again in my adult-y life, it’s stirred up more questions about how/where/why the idea for the Matrix started in the first place. Are we really where we think we are? Or are we being controlled to think the way we are?

At least if we’re being controlled, we get to see our collective internet boyfriend, Keanu Reeves, kick some ass again.

It’s only a dream…