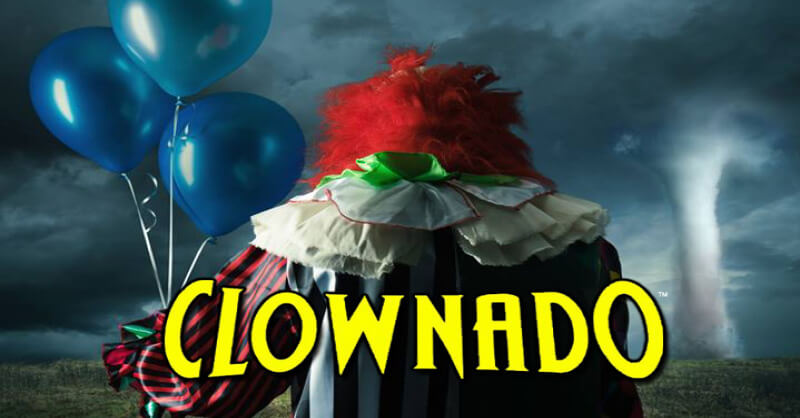 Whilst browsing around different horror movie review sites, blogs, and the like, I came across a movie called “Clownado”. At first glance of the image with the clown in a dark setting, I thought, perhaps this is a review of the new “Joker” trailer with Joaquin Phoenix?

Nay, my friend. This picture was far darker than that. It had a certain unedited, pixelated amateur air to it, nothing DC Comics would ever dare to attach their name to.

So what in god’s name is this “Clownado” thing?

Let me lay down some learning from you, and in real-time as well. (*side note – I’m not sure how you could tell I’m doing something in real time, but, trust me, this is my true, unbiased reaction of uncovered this mysterious piece of cinema).

That’s Where the Trouble Began. That Poster… That Goddamn Poster…

What we have here is a failure to have an original poster. It looked like a mix of “Twister”, “Sharknado”, “Killer Klowns from Outer Space”, and “IT”, but maybe that’s what they where going for…?

The colours are nice and vivid, as per clowning would usually dictate. I love that Linnea Quigley is in this and I deeply want her to be the Final Girl *crosses fingers* if only to see her survive.

I like the typeface as well (shut up, I get nerdy for stuff like that). It’s a great poster, but, obviously, with a name like “Clownado”, it probably gave most of its money to the graphic designer. On to the trailer!

Huh. Just as I suspected.

Low production value. Terrible acting. The best shot out of all of it was the (most likely) stock footage of a small plane taking off, presumably trying to outrun the Clownado.

Oh boy, why do these B-movies always have horrendous lighting? All I ask out of life is for a B-movie to have better lighting. Don’t even have to touch the script. Leave the sets the same. Ask the actors to be even worse, but PLEASE, just light the damn thing better. I’m praying that the “Clownado” movie will be better than the trailer…

Synops This aka The Synopsis

“Clownado” is the perfect storm of tornado, clown, and low-budget madness. A huge storm rolls in, bringing with it killer, sadistic clowns. It’s unclear whether the clowns come from the tornado or harness its power to kill helpless people, but the concept is not all that original.

I’ll give it this – it does look like something light and fun that you could watch with friends that enjoy bad movies. And it’s not nearly as offensive-looking as some other B-movies. The had an Indigogo campaign for it, and raised nearly $25,000 for the movie (which is impressive in itself).

Regardless, I’d give it a go, just to have the satisfaction of saying on my deathbed, “I saw ‘Clownado’”.

It’s only a dream…